Writers  can find inspiration almost anywhere, and they don’t have to go too far to find those ideas. Checking Twitter or Facebook feeds, reading a daily newspaper, watching a television program, visiting an art gallery, eavesdropping on conversations…

Once that idea takes root, it’s like a song that you can’t get out of your head. You wake up thinking about it, dream about it, and fantasize about it. You can even imagine the A-list actors who will star in the screenplay based on your novel. You may seek validation from family and friends: “Don’t you think that would make a great novel?” Unfortunately, too many ideas remain fantasies and don’t make it to the next step: transforming an idea into a premise.

What is a premise?

A premise is an idea fleshed out with details. You should be able to state this premise in two to three sentences while answering the questions: Who, What, When, Where, Why, and How.

Here is one of my examples:

During my cancer journey, I read two to three cozy mysteries a week. I enjoyed these well-plotted novels in the tradition of Agatha Christie and Murder She Wrote. The crimes takes place “off stage” and very few graphic details are provided. That is, the novels contain little violence, sex, or coarse language. The majority of the cozies I read were based in the United States and England.

Halfway through chemotherapy, I started imagining a cozy based in Ontario. That was the original idea, and it wouldn’t leave me. But it wasn’t enough to start writing the novel. I continued reading cozies and let the idea percolate. Slowly, I added details about the protagonist and setting: A50something woman. Italian Canadian background. Mathematics teacher. Lottery winner. Based in Sudbury. Four dead blondes.

I came up with the following premise: What if a teacher wins a $19 million lottery and returns to her hometown of Sudbury, only to find herself the primary suspect in the murders of four blondes. Can she prove her innocence and solve this case before it’s too late?

Once I had the premise in place, I started writing A Season for Killing Blondes.

In June 2015, The Wild Rose Press released A Season for Killing Blondes.

excerpt from A Season for Killing Blondes… 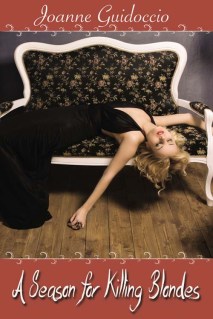 Carlo had removed his suit jacket and rolled up the sleeves of his light blue dress shirt. His tie lay on the desk. The rumpled look suited him to a tee. And his large black-rimmed glasses accentuated those unforgettable blue eyes. Bluer than blue. Sky blue. Cornflower blue. Robin’s egg blue. Years ago, Adele Martino and I had come up with thirty-seven descriptions of Carlo Fantin’s eyes when Mrs. Gillespie assigned one of her Monday morning English composition exercises. As I tried to recall the other thirty-three, I realized that Carlo was speaking to me.

Darn! Another officer in the room, and I had missed his name and more importantly, his title. Was he a detective or a constable? I’m sure Sofia would know. In the meantime, I better stop daydreaming and start listening. I nodded in the direction of the beefy officer. Dark hair. Dark eyes. Expertly trimmed moustache. A big bear of a man who reminded me of Magnum P.I.

Carlo cleared his throat. He was ready to get down to business. Police business. “It appears that Carrie Ann was your first client. You haven’t opened this office for business yet. How did that happen?”

My heart raced as I spoke. “After Sofia and my mother left…I’m not certain about the time…um…I…I heard a knock at the front window. I looked up and saw Carrie Ann. Hadn’t seen her in ages.” I paused and then added, “Still wearing the same pageboy hair style and that blonde color—”

Carlo waved his hand. “Stick to the facts, please.”

I felt myself reddening as those piercing blue eyes bored right through me. “Oh, sorry. Um, I let Carrie Ann in.”

“And?” Carlo said when I hesitated.

I shrugged. “We just talked for a while, then, uh…” I closed my eyes and tried to recall the conversation. But nothing concrete came to mind, only Carrie Ann’s infectious laugh and bubbly compliments about the decorating scheme. When I opened my eyes, the other officer offered me a water bottle. I thanked him and gulped down half the contents.

“You scheduled her for a session tomorrow morning,” Carlo said as he held up my appointment book. “Carrie Ann is…was considered one of the best interior designers in town. Why would she need counseling from you?” His dark brows drew together in a suspicious frown. “Were you planning to tell her to give it up?”

Where to find Joanne Guidoccio…